Lush have recently announced they would quit social media, deactivating six of their accounts, including Twitter, Instagram and Facebook. (1) While as a move this can be seen as controversial, let’s look at it from a marketing perspective.

Lush announced that they were tired of fighting against an algorithm to get their posts seen and they refuse to pay for them to be shown more. Now, to me this sounds like, “our social media strategy is not working right now so we are not investing in it anymore.”

They claim that this way, they’ll be able to get more genuine engagement from their community. To do so and to keep the conversation active among ‘Lushies’ around the world, they launched a hashtag people can use: #lushcommunity. 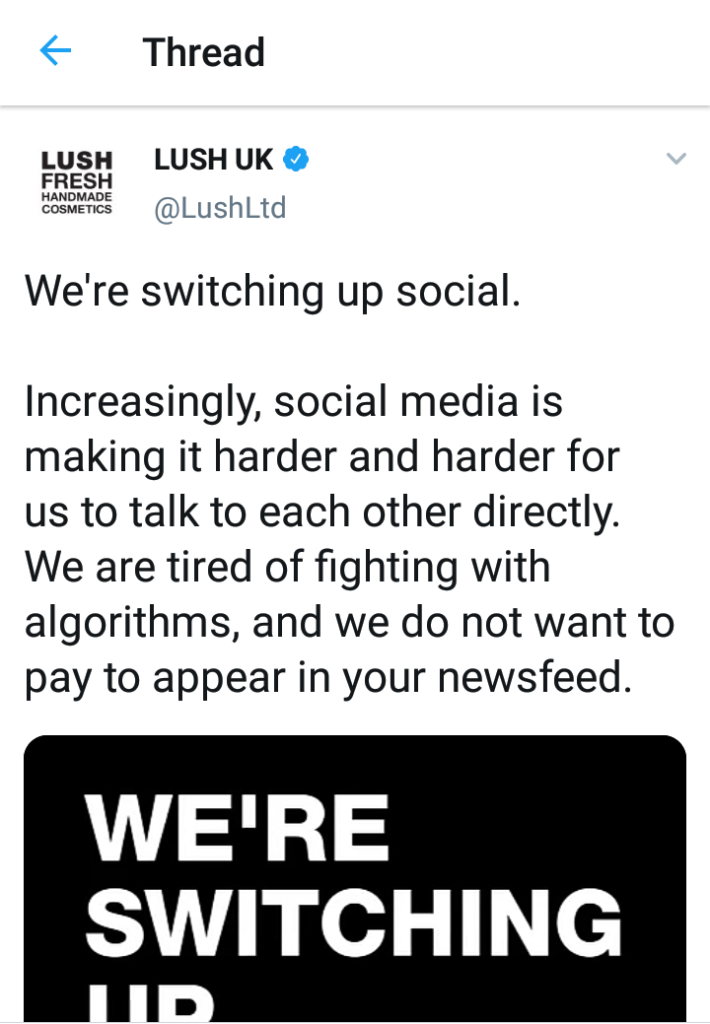 As of the first of December, the #lushcommunity hashtag has 327k posts on Instagram and some accounts made in its name. It looks like people all over the world are jumping at the chance to be a part of this, but the real question is how long will this last?’

And what’s more, the bulk of their marketing strategy always relied on in-store demos, generous product samples and word of mouth. As, they’re an instantly recognisable brand, and have a noticeable smell… have you ever walked by one of their stores? So is quitting social media really that much of a big deal for them?

One thing’s for certain… it’s a clever strategy, and it got them some amazing PR coverage as well. Now, all we need to do is report back in a year to see whether they stuck to their social media ban this time around.

Well, we hope we gave you some food for thought! Want to learn more about what we do and how we can help you? Check out our  digital PR work, and reach out to us if you’re interested in a chat.