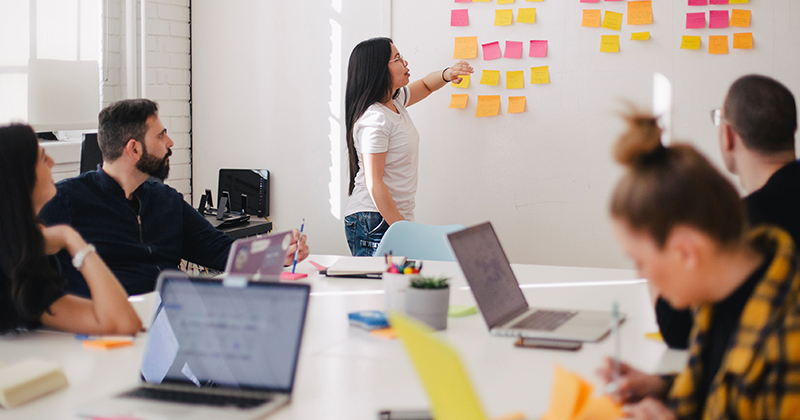 How to have better brainstorms

Most of us have at at some point either attended, or run a bad brainstorm. Often, they go a little like this…

From feedback in training sessions that I’ve delivered the above scenario is pretty common and the reason a lot of people dread brainstorms. So, it’s good to know I’m not alone.

In my opinion there’s a few things that cause brainstorms to be so painful:

Because I’ve been in so many bad brainstorms it inspired me to do some research and find a better way, so I thought I’d share some of the techniques we’ve used to improve brainstorms.

As I said, the reason a lot of brainstorms have a painful start is because everyone’s not really in the room, so the first three of these techniques are aimed at actually gaining everyone’s attention and breaking the ice.

Pretty self-explanatory, essentially everyone has to come up with the worst idea possible for the brand in question. This one’s especially fun as it removes the worry of ‘what if my idea is bad’, as the whole point is to have the worst idea possible. This one also often gets people laughing and joking around which helps to break the tension in the room.

I’ve run this type of session with the client in the room too and they especially enjoy it as so often they’re constricted by ‘our brand could never do that’ whereas this removes that element.

Sometimes we can also flip the bad ideas into good ideas as well.

For this one you put yourself in the mindset of another person, so we’ve done this with the likes of Kanye or Trump, and you have to think of what that person would do if they were in charge of the ideas. Again, this generally throws up comedy ideas and helps to break the ice. It also starts to get people thinking creatively and not just about the usual ideas you’d throw out there.

Other varieties of this technique include teleporting where you think about how you’d come up with ideas if you were in a different place (real or fictional) and time travel where you imagine you’re at a point in the past or future.

Everyone’s probably played this game before (potentially as part of a certain drinking game). For this you start with a relevant word to the brand/product/service and throw a ball at someone and they have to say the first word that pops into their head when they hear that word, and it continues. You also have someone writing down all the words that people come up with and then study all the words that have been thrown up and see if there’s a pattern or idea that springs from them.

The aim of this is to generate as many questions as possible about the topic/product/service being discussed.

Think of this like when you have a conversation with a child and their response to everything you say is “but why?” Although frustrating, this actually makes you go a lot further exploring something than you originally planned to which is really useful.

Once you get to the end of one line of questions move onto another and at the end review to see whether the questions and answers throw up any interesting ideas. This is especially useful for content ideas.

This is probably the technique that improved our brainstorms the most. The method we use most commonly, Brainwriting 6-3-5, needs six people and each is given a sheet of paper that looks something like the below:

They are then given five minutes to write down three ideas. The sheet of paper is then passed to the person next to them and they have the option to either develop the ideas already there if they have something to add or write down three new ideas. This continues until you receive your original sheet back.

If you had six people for this then you’ll be left with 108 ideas within just 30 minutes – much better than a standard brainstorm, right?

Generally, we’ll then use the remainder of the brainstorm to discuss everyone’s favourite ideas and start to whittle these down into the ones we want to develop further.

At the end of any brainstorm you’re left with a range of ideas and it can be tough to decide on which are the best to progress and develop further.

One way to do this democratically is to lay all the ideas out and give everyone three stickers/sticky notes which are their votes. They can then go place their votes on their three favourite ideas (if they just love one idea they can put all three on that one or two on one), then once everyone’s done, the ideas with the most votes are the ones that move on to be developed.

So, in summary my top tips for running better brainstorms are: