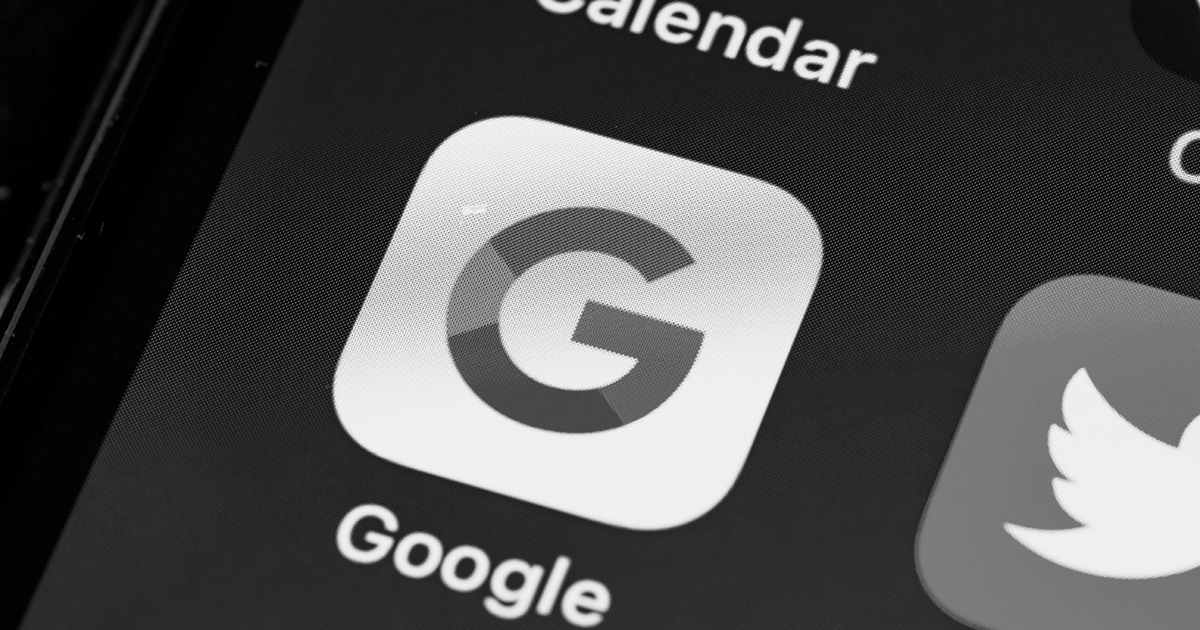 Hello everyone! Well, 2021 has almost come to an end, so we thought it would be a good chance to review the biggest SEO news highlights of 2021. And so, here they are:

In 2021, Google saw a wave of updates aimed at improving the algorithm and the search experience. As is the norm, several core updates were released over the course of the year. These were the June 2021, July 2021, and November 2021 core updates.

The November update has caused quite a stir within the community, with many reporting wild SERP fluctuations and volatility post-update. Mordy Oberstein would go on to report that the November update was, “Similar to how the July update rolled out, but the return to ‘normal’ levels of fluctuations was even more dramatic here (i.e., less of a “slow down” period compared to even July).”

Alongside the core updates, Google has also been consistently releasing algorithm updates across 2021. 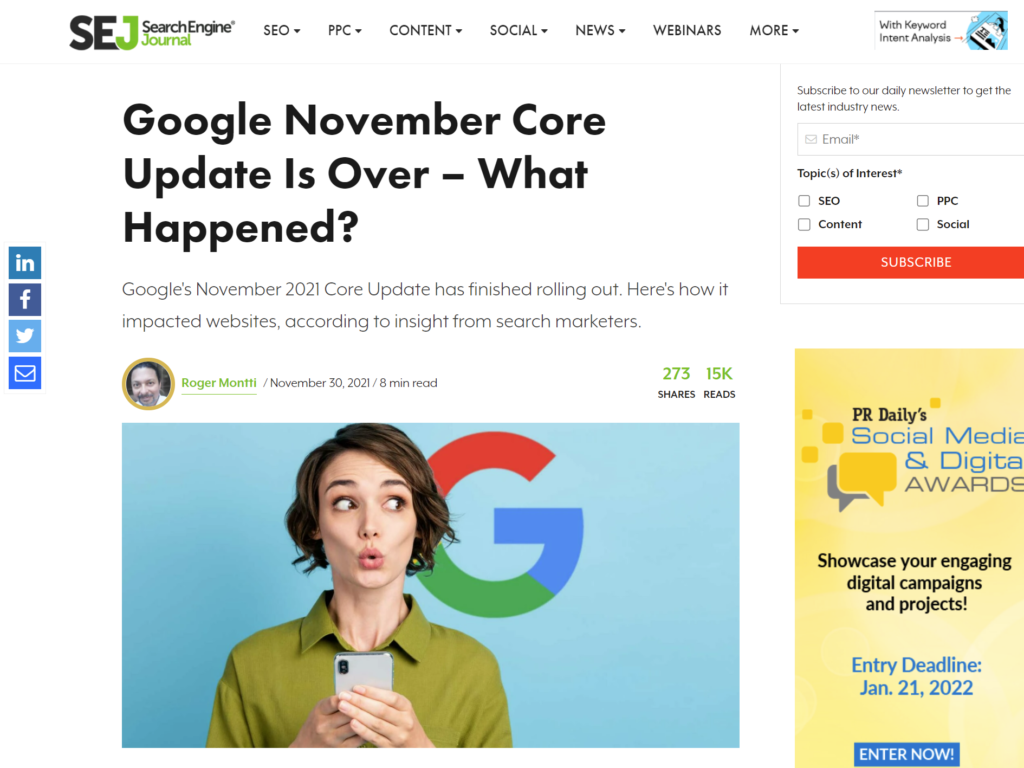 You can find the full article here.

Amongst these algorithm updates, Google also released the 2021 spam update, which is designed to clear out junk websites that exist within your search results.

This update was launched in two phases, with the first phase concluding on the 23rd of June 2021, and the second update following a week later. And Google has kept the information regarding what these updates will do and what they are targeting close to their chest.

However, it is safe to assume that this update will be targeting poor quality websites that try to obtain a user’s sensitive information or spread malware. Google’s spam updates are also known for targeting sites that are fronts for phishing scams.

Google also launched a third spam update, with this one being aimed at link spamming:

“In our continued efforts to improve the quality of the search results, we’re launching a new link spam fighting change today — which we call the “link spam update.”

Sites taking part in link spam will see changes in search as those links are re-assessed by our algorithms. ”

And Google’s announcement indicated that this update will be targeting links generated through sponsored, guest, or affiliate content from low-quality websites, which are designed to generate revenue from selling links.

Page experience becomes a ranking factor in the new update

Another significant update released this year was the Google Page Experience update. This update was released back in June and finished rolling out in August, which has made the page experience a more significant ranking factor.

“We’ll begin using page experience as part of our ranking systems beginning in mid-June 2021. However, page experience won’t play its full role as part of those systems until the end of August. You can think of it as if you’re adding flavouring to a food you’re preparing. Rather than adding the flavour all at once into the mix, we’ll be slowly adding it all over this time period.”

Page experience is a metric that looks at several factors to determine the optimal browsing experience for a user.

So, factors that will now have an impact on ranking are:

As a result of this update, page experience and core web vitals are no longer considered tie-breakers but are now impactful ranking factors.

“It is a ranking factor, and it’s more than a tie-breaker, but it also doesn’t replace relevance.

As an SEO, a part of your role is to take all of the possible optimizations and figure out which ones are worth spending time on. “

The updated page experience algorithm rolled out on mobile firstly, with desktop to follow in February 2022.

The updates in 2021 just keep on coming! On December the 18th, Google announced a new December 2021 product review update for English-language sites that will take three weeks to roll out.

Interestingly, Google has stated that this update does not intend to penalise sites with thin review content, but only reward sites with review content that offers “insightful analysis and original research”.

Google has also announced that this update will have periodic refreshers on the algorithm update. However, they have not guaranteed that any changes made during these refreshers will be made known to the community.

Back in August, it was discovered that Google was automatically re-writing title tags that appear in search results. Users were reporting that their prewritten title tags were being replaced with the page’s H1 tag, or other relevant text on the page.

This has long been the case for meta descriptions. However, community reaction has been mixed due to the lack of control over how Google automatically rewrites title tags.

A new feature that was introduced in 2021 was continuous scrolling on mobile devices to replace the paginated scrolling system that existed beforehand.

This means that Google will now automatically load the next page of search results – up to the fourth page. This allows users to seamlessly scroll through 40 results before needing to click “see more”.

Google goes on to explain that, “You can often find what you’re looking for in the first few results, but sometimes you want to keep looking.” And for those searchers who want to keep on looking, you’ll be able to continuously scroll “up to four pages of search results” without clicking to load more! 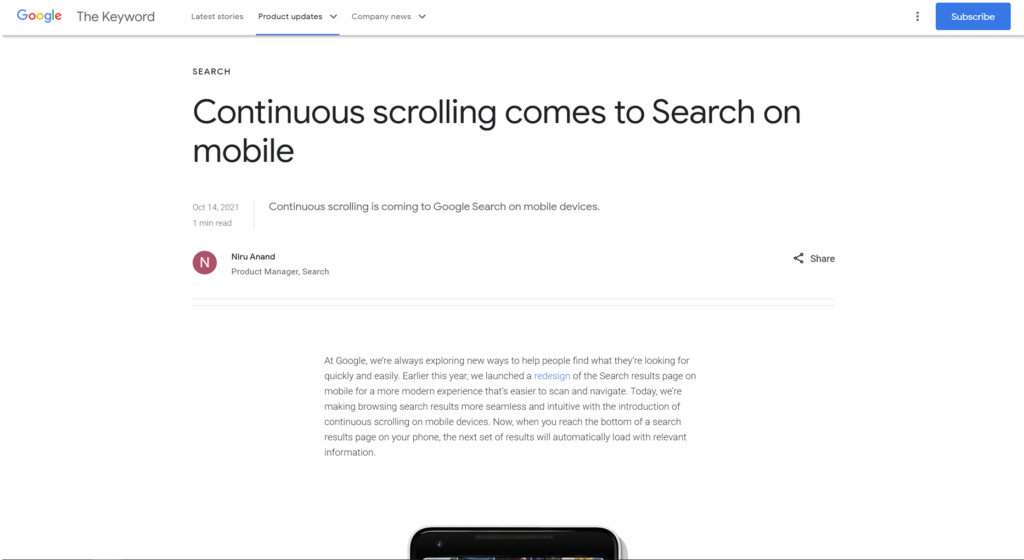 You can view the full article here.

Google announced in 2021 that it would be doing away with the deadline for mobile-first indexing, due to several sites still being unable to move over.

Google wrote, “After analysing the sites that are not yet indexed mobile-first, we’ve determined that some of these sites are still not ready to be shifted over due to various unexpected challenges that they’re facing.”

Historically, desktop versions of a site would be used for indexing, but with the increase in mobile search results, Googlebot would be set to crawl sites with the smartphone agent setting by default. And in March 2020, Google reported that 70% of all websites had moved over to mobile-first indexing. 2021

2021 also saw the largest CTR studies ever conducted, thanks to the researchers at SEO Clarity.

The researchers took over 750 billion impressions across 17 billion keywords to analyse the click-through rate on mobile and desktop, all based on position, country, season, and industry.

The entire study is available to download via SEO Clarity, but a few key insights we can take from it are:

· CTR (Click Through Rates) in positions 17–20 are higher than in positions 11–16 across the globe. This indicates that users are more likely to scroll through search results.

· May and December have the lowest click-through rates, with July through September being the highest.

Well, that about covers it for this year’s biggest SEO news, with lots of updates and changes to keep us on our toes! Now we look forward to what 2022 will bring.

From all of us in the SEO team, have a great Christmas and a Happy New Year! Thanks for reading.